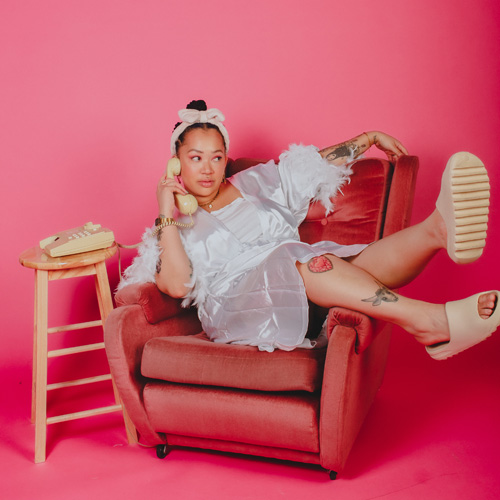 Giving you main character energy, iamkyami is serving glimmer-swirl indie RnB with a side of poly gluttonous punk attitude. Weaponizing positive vibes, theirs is an astute, eloquent head on shoulders that just happen to be enveloped in Hello Kitty dungarees and a streetwear edit overseen by Yvie Oddly. Unpacking and exploding the rich opulence of pop RnB tropes, Ky’s signature sound lies in the stillness of the aftermath. A far-future cartoon landscape dotted with skyscraper-sized themes, where the .zip-file-distortion of pillowy synths wobble in the rising heat of the afternoon and light-headed guitar flurries float by like dust in the sunlight. Raw, honest and with near ninja-like emotional literacy, iamkyami is your slick-talking, perceptive narrator exploring notions of identity, uniqueness and self: “My heritage is one where two worlds collide and that’s something really special. Being half Japanese and half Black American, there are so many influences to pull from and my aesthetic is heavily based on my identity. Not only my ethnic identity but my identity as a Queer person too. My music is simply another way to express myself and the ways in which I view the world.”

Following 2020s debut EP ‘Life of Ky’ and a host of collaborations with the likes of Dr Martens, Blackstar Amps, Pretty Little Thing and Primark.
2021 saw iamkyami sign to Manchester independent Heist or Hit. Embracing a scatter-brained approach to song-writing and production, Ky’s centre is a quartz leaking new and old, weird and wonky, smooth and pretty. “We had dinner at my aunt’s house a lot and whenever she would cook there was always gospel or Mary J Blige or D’Angelo blasting in the kitchen. But I arrived at the likes of Tyler, the Creator, BROCKHAMPTON, SZA, Steve Lacey and Vampire Weekend via Britney Spears and Avril Lavine.” Blitzed up with lyrical nerve and cottony production, these influences inspired Ky to push authenticity to the centre of the frame.

From main stage performances at the Liverpool International Music Festival and interviews with Gal-Dem magazine to support slots for Yazmin Lacey, Georgia, Pizzagirl and Roy Ayers, iamkyami has earned acclaim across the board. The airwaves are no different, with DJs at Radio 1, BBC 6, 1XTRA, Reprezent Radio and Worldwide FM all lining up to call themselves fans. It’s not hard to see why, Ky has the ability to get to the essence of what many artists spend albums chiselling away at.
A Venn diagram where the personal overlaps the universal. 2022 is set to be the year of Kyami.

&nbspCool and fresh, yet blessed with a velvety warmth, this is modern alt-pop at its very best

The Line of Best Fit