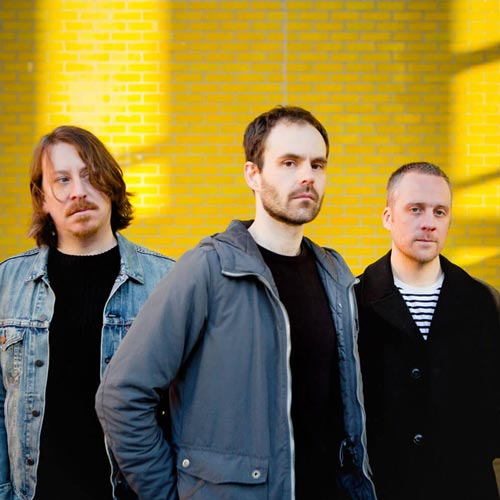 Forming in the early 2000s, The Longcut quickly built a reputation as a fearsome live act. With comparisons to bands like New Order, Sonic Youth, Mogwai, The Longcut carved out a sound all of their own, mixing post punk and industrial sounds with lush soundscapes, electronic and live beats, and a unique set-up, with singer Stuart alternating between vocals, manning the electronics, and drumming.

Signing to the legendary Liverpool label Deltasonic, they released the blistering EPs, ‘Transition‘ and ‘A Quiet Life’ in 2004 and 2005, followed by their critically acclaimed debut album, ‘A Call And Response‘ in 2006. After touring and appearing at festivals across the globe the band started work on their second LP, ‘Open Hearts‘, which was released on Manchester indie label, Melodic, in 2009.

The band started work on their third LP almost immediately, but the journey was far from smooth. Working in snatches of time between work and family commitments progress was slow. Seven years in the works but much less time in the making, several cuts of each song and two versions of the album later, the band returned home to Deltasonic and released their rapturously received third album, ‘Arrows‘, in April 2018. Chiselled from chopped up loops, original demos, welding together long improvisations then building, re-recording and fine tuning, ‘Arrows‘ captures many moments in time. Not least, the whisky-fuelled home recording sessions where kitchen shelves were rearranged to re-amp bass parts at full volume and bedrooms were transformed into control rooms and vocal booths strewn with amps and microphones.  It may have taken its time, but throughout the record’s walls of sound, tortured beauty lies within.

&nbspNew song 'Deathmask' ends almost a decade of silence, and it's a blistering, Brutalist return, a slab of concrete riffs and scorching synth noize. An ambitious six minute return, it's a real surprise and better than we ever could have hoped.