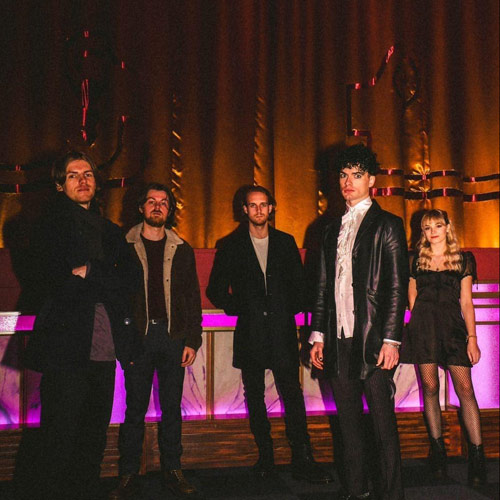 You might be forgiven for wondering what happened to these Liverpool based indie rockers. 2020 was quiet for The Peach Fuzz (even by pandemic standards!) but there was good reason… the band split from former label, Skeleton Key, and now they are back and better than ever.

They have been using the downtime to write furiously and have a host of new things coming soon: There is a new single, a new logo, and a lot of new live dates.
Their overall sound is still the same 80’s infused, refreshing indie-pop that their fans love, but now it is tighter and more honed. This is perfectly evident on upcoming single ‘Never Wanna See The Light‘ produced by Bill Ryder Jones, formerly of The Coral, and mixed by the much-in-demand Tom Longworth. It is the perfect upbeat summer hit for a nation coming out of lockdown.

The band have continued building a steady following ever since they formed back in 2018, they have supported the likes of The Zutons, Clean Cut Kid, and The Vryll Society, they have had big support from BBC Radio 1 Introducing, 6 Music, and have been playlisted on Radio X and XS noise. Their single ‘Outside Looking in‘ is a massive Spotify hit giving them impressive stats – clocking up 1.25 million streams and counting!, and it’s clear their fans are still right with them too as tickets for their first show back, in June, sold out in an hour – so an extra night had to be added.

The band have a lot of new material on the way starting with a new, self-released single (due for a July release), and aim to put out several more and/or an EP later throughout the year. This will be accompanied by regular gigs, starting in June, and the band have lots of exciting ideas about what is to come next.