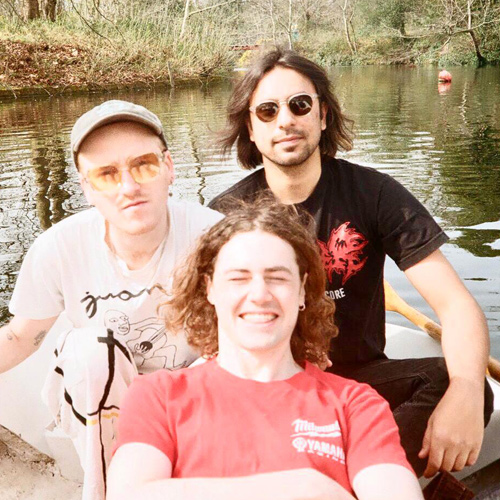 1. Turn Me Into A Crocodile (And Let me Eat your Ego)

Truman Dinosaur first came to light via a drunken conversation between friends working at the Old Blue Last in 2018.
They self-released their first single ‘Turn me into a Crocodile (And Let me Eat your Ego)‘ in early 2019 – an infectious debut reminiscent of a bygone era, with fresh pop sensibilities. Following up from their outstanding debut, the band released ‘Does This Feel Like Heaven‘, this time with physical release support from Flying Vinyl, and sell-out headline shows at The Old Blue Last and Sebright Arms.

In their short time as a band to date, they have already performed throughout the UK, with artists including Amyl & The Sniffers, Peace, Swim Deep, Jaws and Talk Show.

With an undeniable buzz about them, they enlisted the help of friends Blaine Harrison & Henry Bennett, who produced their next two singles ‘Take it Easy Tiger‘ and ‘To Be Expected‘. They quickly gained backing from indie taste-makers Huw Stephens and John Kennedy, as well as being premiered on Jack Saunders’ Indie Mixtape on BBC Radio 1.