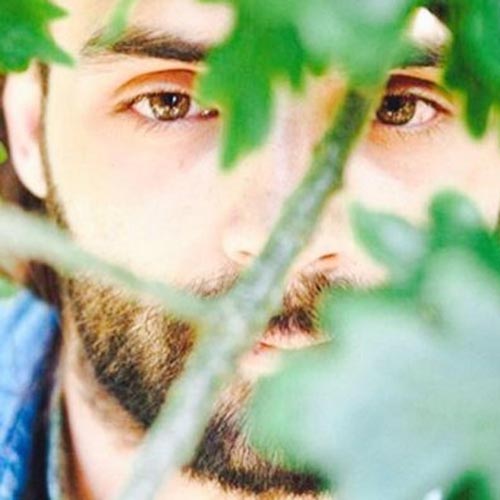 “Folk with something behind the eyes“, is so the music of enigmatic Marvin Powell, singer / songwriter from the working class suburb of Wavertree Liverpool. His songs, beautifully crafted, capture the same fragile spider web beauty and emotional resonance of Nick Drake. However, such is the compelling nature of his eloquent tales – his work is cast in its own image. Marvin is his own man, refusing to play covers as a teen and be another jangly Dylan wannabe. His unique and enigmatic vocals soar and whisper with poetic tales over a backdrop of stylish folk guitar… between songs that slide from major to minor.

He has been performing on the Liverpool music scene since his late teens, shyly creeping into open mic nights, overcoming severe stage fright to hone his craft and scurrying away again into the velvety twilight of which he sings.  On getting his first job in a local coffee shop that hosted open mic nights, his love affair with music was ignited. Naturally self-effacing and shy, only after months mustering the confidence to get up himself, was he able to overcome his nerves to test the water with his own compositions, “Seeing people just get up with a guitar with something to say lit something up in me. Honest lyrics, personal or political, are so important to me.“

Marvin, writes about human nature, love and its perils. His songs insidiously affecting and charged with dark, inward melancholia that sends a shiver down the spine. He’s no stranger to social commentary either, his music is by turns romantic, cynical and haunted, with lyrics that are borne by an old soul writing from a modern urban perspective.

With his latest EP, ‘Opulent Heart‘ a collection of ethereal heartfelt hymnals set to complete a trilogy of recent EPs. The latest collection of songs where touchstones Paul Simon and Devendra Banhart are framed with sun dappled psychedelia, are nuanced, honest and intimate.

After a hectic 12-months that saw Powell support John Cale’s Velvet Undergroud at their sell out concert in Liverpool and stand out performance at the Liverpool International Music Festival in July. 2018 has started where he left off with a hometown sell out headline gig and supporting kindred spirits The Lost Brothers on several of their UK tour dates.

'Travelling On' is a staggering preview of the release that knocks the wind from your lungs. Delicate guitars bob and weave beneath Powell's bonfire-crackle voice, which steals the show on multiple occasions - his affecting coo is sodden with sincerity